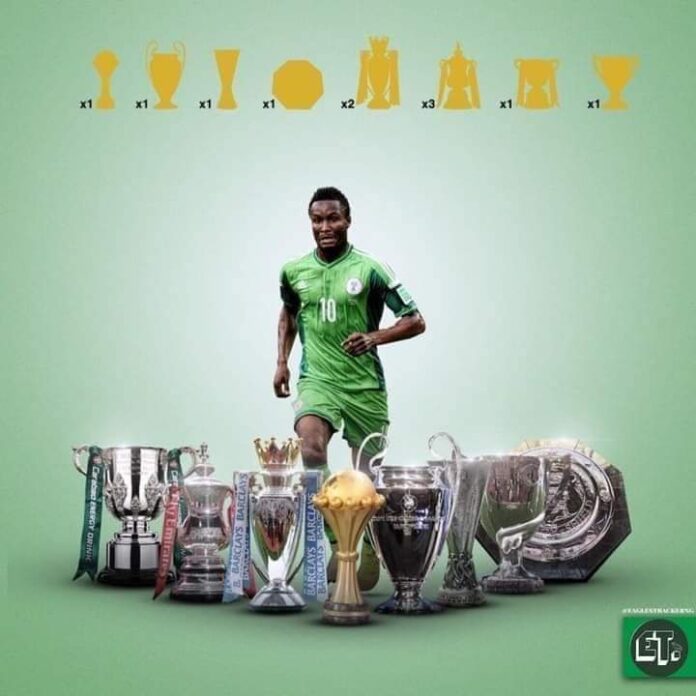 Mikel Obi has announced his retirement from professional football on Tuesday following a 20 years glittering career. Tributes have since continued to pour in for the former Super Eagles and Chelsea midfielder.
Mikel, 35, last featured in the squad of any club on 4th November 2021 when his contract with Kuwait SC was terminated after only four months. He did not play for the Kuwait Premier League champions during the short spell.
He opted to hang his boots having been without a club for 10 months.
Mikel announced on Tuesday, through his official social media account, that he has retired from professional football.
“There is a saying that ’all good things must come to an end’ and for my professional football career, that day is today”, Mikel announced on his official Instagram page.
“I look back at the past 20 years of my career, and I must say that I am very satisfied with all that I was able to achieve and more importantly the human it has helped shape.
“All of this would not have been possible without the unwavering support of my family, managers, clubs, coaches, teammates and most importantly my ever-loyal fans. You supported me through my highs and lows, even on days when I did not live up to your expectations. I say a big thank you.
“I will also like to encourage everyone who I may have inspired one way or the other in the course of my career to never give up on their dreams, for every time you think about quitting, remind yourself why you started.
“This is not goodbye; it’s the start of another journey, another chapter of my life. I look forward to what the future holds and I hope you will walk with me. Thank you”.
Mikel’s career lasted two decades and brought him a total of 15 medals.
He won two English Premier League, three English FA Cup, one English League Cup, one English Community Shield, one UEFA Champions League and one UEFA Europa League with Chelsea. He also won one Turkish Cup with Trabzonspor.
With Nigeria, Mikel won the African Cup of Nations in 2013 and finished third on three occasions in 2006, 2010 and 2019. He also led the Nigerian team to the bronze medal at the 2016 Olympic Games in Rio, Brazil.
In a stellar career that began at hometown club Plateau United in Jos in 2002, Mikel grew to become a popular figure at Chelsea FC and was a crucial part of the all-conquering Chelsea side that dominated Europe in 2012.
Reacting to the club legend’s announcement, Chelsea wrote: “Enjoy your retirement, @Mikel_John_Obi! Thanks for the memories”.
Former Eagles head coach Austin Eguavoen said: “Congratulations on your retirement, John Mikel Obi. An honour coaching you at the FIFA U-17 World Cup 2003, AFCON 2006 and AFCON 2008. You played it all and won it all. Enjoy the good life”.
Several other footballers also took to social media to congratulate Mikel on his retirement.
Super Eagles striker Odion Ighalo wrote: “Congrats skippo and good luck”.
“Ahhh skippo I miss you sha. LEGEND”, Ogenyi Onazi wrote.
Retired Ivorien forward and former teammate at Chelsea, Salomon Kalou relished the memory of playing alongside the Nigerian. He wrote: “OGaaaaaaaaaaaa. I dey miss u Baba. Thank u for that wonderful journey. I fancy well well that 1st foto Obina”.
Ex-England and Chelsea captain, John Terry wrote a heartfelt message to Mikel: “@mikel_john_obi, what a great career my friend, it was a pleasure to play and share the dressing room with you. Love you Georgie Boy”.
Mikel made just six appearances for Norwegian side Lyn Oslo before his controversial switch to Chelsea in 2006, after earlier agreeing to join rivals Manchester United.
Chelsea ultimately had to reach a financial settlement with the Red Devils, their main Premier League rivals at the time, but they had no regrets about snatching their jewel.
Over a decade-long stint, Mikel made a total of 372 appearances in all competitions, becoming a cult hero for his defensive performances and lack of goal threat with just six strikes during his time in West London.
As well as winning the Africa Cup of Nations with Nigeria in 2013, Mikel represented his country at the 2014 World Cup and claimed an Olympic bronze medal in 2016.
After a two-year relationship with China clubside, Tianjin TEDA, Mikel returned to English football with Middlesbrough, playing a season at the Riverside Stadium before moving to Turkish side Trabzonspor.
Having won the Turkish Cup, Mikel again accepted a contract at an English club – Stoke City – making 39 appearances in the Championship during the 2020/21 season.
Mikel last represented Kuwait SC, enduring an unsuccessful spell in the Middle East and being left without a club throughout 2022.
Credit: The PUNCH

October 6, 2022 0
Nigerian Exchange Limited (NGX) has announced the listing-by-introduction of Geregu Power Plc (“GEREGU”) on the Main Board of The Exchange on Wednesday, October 5,...

November 18, 2022 0
A report released today by the National Bureau of Statistics (NBS) says 63 per cent of persons living in Nigeria (133 million people) are...

October 4, 2022 0
Mark Zuckerberg‘s personal fortune has nosedived to $76.8 billion in the last year, taking him off the list of the 10 richest people in...

77% of Retail Organisations Hit With Ransomware In 2021 – Sophos Survey

September 11, 2022 0
Organisations in the retail industry experience 77 per cent hits by Ramsomeware, making the industry the second most targeted industry by ransomware in 2021,...

ABOUT US
About The Numbers Nigeria
FOLLOW US
© Copyright 2022 - TheNumbersNG